MEN OF ACTION: The (Irish) Descendants

There are many faces to The Wild Geese® today, and for those who didn’t know one of them is the superstar George Clooney. Movie star and activist, Clooney displays the spirit of The Wild Geese® , which comes from his ancestral home of Ireland. New information has revealed the circumstances under which George Clooney’s great-grandfather left Ireland in the 1850s. Through adversity he remained Unbroken, and charted a new legacy in the USA.

Leaving Ireland has never been easy for Wild Geese. In 1691 The Wild Geese® , lead by Patrick Sarsfield, chose to seize their destines abroad, but for other Irish emigrants this was forced upon them.

One of these was Nicholas Clooney, George’s great-grandfather. The movie star’s ancestry goes all the way back to Windgap, Co. Kilkenny, where Nicholas worked as a farmer in the 1840s. Nicholas was from a humble background, and worked off the land, before ‘middlemen’ arrived in Ireland, looking to amalgamate small holdings, like the Clooney’s, into bigger farms.

This was rarely a fair process and the farmers were often coerced, sometimes violently, to leave their land. Nicholas was forced out, his livelihood stripped from him. But Unbroken, Nicholas picked himself up and looked towards the opportunities in the USA. As a skilled worker, he had a lot to offer the United States.

Like The Wild Geese® before him, Nicholas called on an unprecedented courage. We imagine that as he boarded the ship to the New World, he was filled with exhilaration and even though his heart would remain in Ireland, he was staking huge steps towards building a legacy the world would see.

New records, discovered by www.findmypast.ie, show that George’s great Granddaddy left Ireland in 1852, settling in Kentucky. He worked hard and applied himself, integrating into his new community. Over one hundred years later, one of the biggest star in American was born. Today the name Clooney is famous around the world.

At The Wild Geese® we have a saying that proves the reach of the Irish in all parts of the world:

“Wherever you are in the world, if you are of Irish descent you are part of this story and entitled to call yourself Wild Geese”

No matter where they are, their links to Ireland are unbreakable, and have been built by courageous individuals like George’s Pops Nicholas Clooney.

As a man true to his heritage, George and his family are still in contact with cousins back in Ireland. He’s been back to Ireland to explore and sip some Irish whiskeys in Dublin and is planning a motorbike tour of the country, once his work and new marriage has settled down!

But he’s very familiar with the warm welcome home he’ll receive. “My dad went to Ireland,” he described, “and when he told them his name, he said everyone insisted on buying him drinks and he got smashed and had a great time!”

Interestingly, Clooney is an anglicised version of the Gaelic ‘Clughnach’, which means rouge or flatterer. Spot on then! 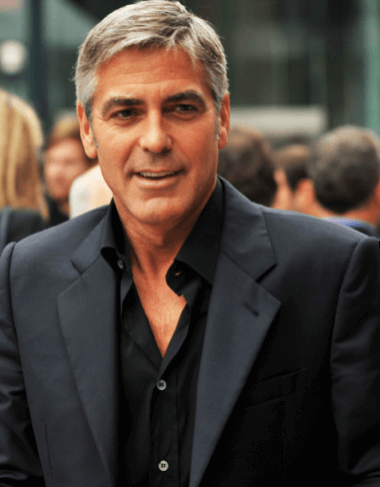 May 18, 2015 / 273
Like many ‘Wild Geese’ before him Brendan ‘Paddy’ Finucane had no hesitation in joining the RAF at the outbreak of the Second World War. With... Continue reading
Community
Read more

March 9, 2015 / 337
Geese have symbolised many things in cultures across the globe. To some they symbolise loyalty and courage and for others they represent determination and resilience.... Continue reading

February 11, 2015 / 255
With Fifty Shades Of Grey soon to be unleashed in cinemas we take a closer look at the film’s star Jamie Dornan. A Man of... Continue reading
Community
Read more