In 1787, reflecting on his travels in North America, George Grieve noted:

‘On more than one imminent occasion, Congress owed their existence, and America possibly her preservation, to the fidelity and firmness of the Irish’

The Irish were already prominent members of American communities by the time the American Revolution started. Sympathising with the plight that America faced, many Irish soldiers flocked to the support of George Washington and his commanders and joined the fight for freedom.

These Wild Geese quickly became the largest immigrant group in the Continental Army. It is thought that they made up one quarter of the fighting force. France sent support as the revolution intensified and the first troops it sent were the regiments Dillon, Walsh and Roche of the Irish Brigade. Irish soldiers were a familiar yet formidable force on the battlefields, and played their parts in forming the new nation of America. As George Grieve noted their contributions were many and they pursued the path to freedom with courage and determination.

The Marquis de Lafayette noted this contribution in 1779, saying: 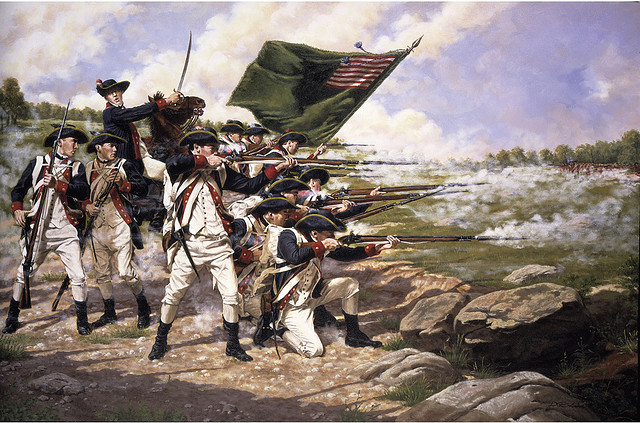 The Continental Army fighting at the Battle of Long Island, 1776 (image from The National Guard, via Flickr Creative Commons)

But toward the end of 1779, the soldiers fighting in the revolutionary war faced the bleakest winter yet. General George Washington set up camp in Morristown, New Jersey. Snowstorms were commonplace and in this harsh climate the Continental Army was hungry and cold. Morale was low.

After months of these conditions, General Washington recognised that his troops needed to rest and it was important to reinvigorate moral. The key to this was St. Patrick’s Day.

Many of the soldiers in the camp were Irish or held Irish ancestry, with the regiments from Pennsylvania and Maryland thought to be nearly half Irish. Seven of the eleven brigades were commanded by generals either born in Ireland or with Irish ancestry. So it seemed appropriate to celebrate St Patrick’s Day.

Washington declared the 17th March 1780 as an r&r day for the camp, awarding the holiday ‘as an act of solidarity with the Irish in their fight for independence’.

Today it is thought there are over 50 million people of Irish ancestry in the USA and St Patrick’s Day is celebrated throughout the country.