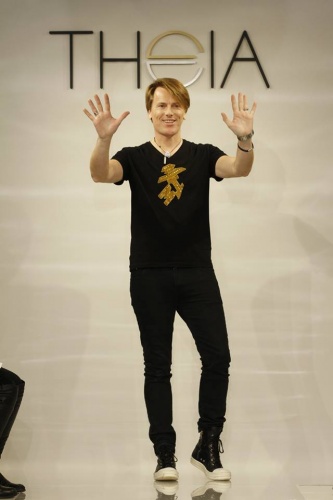 Don O’Neill has become a highly sought after name in the fashion industry. Originally coming from Co. Kerry, Ireland, he is now regularly chosen to dress a-list stars.

Don O’Neill’s speciality is gowns. He is creative director at Theia, a couture wedding dress  design company, and he counts A-list stars among his fans. He dressed Carrie Underwood at the 2013 Grammys and Oprah Winfrey wore his designs at the premiere of her film The Butler.

‘The drama, the long lines of flowing skirts, they are the most transformative of dresses,’ he explained to thefashionspot.com. ‘They allow women to step into a dream, an alter ego, to feel like a goddess, with rich, beautiful fabric swirling around her legs, yards of luscious printed silk chiffon’

His natural Ireland, particularly the dramatic scenery, has been an important influence over his work.

‘My Irish background hugely influences my work. I grew up in an enchanted picture postcard perfect seaside village on the west coast of Ireland, called Ballyheigue.

‘My home was perched on a cliff top against which ferocious winter storms hurled seaweed against our bedroom windows. The ruins of a centuries old haunted castle was on the other side of our house. The mast of a 17th century Spanish Galleon shipwrecked on the beach where it sunk into the sands. Fantastically flaming sunsets lit the skies every night in a mind-blowing show of kaleidoscopic colour and magical waves crested in the bay above a submerged church from a millennia ago’

Wild Geese throughout the centuries have depended on their skills to survive and prosper in new environments. For The Wild Geese® of 1691 this was their camaraderie and determination on the battlefield. Today Wild Geese are shining in all industries, but keep Ireland close to their hearts.